A 153-unit luxury apartment and retail building pegged for the heart of downtown Skokie got a green light from the Skokie Plan Commission Thursday, which voted to recommend the project.

In a 7-0 vote with two commissioners absent, the Plan Commission voted to support the site plan for 8000 North — as the new building will be called — with few variations from village code. The final step is village board approval.

The property, located on the northwest corner of Oakton Street and Skokie Boulevard, which is the former home to the Desiree restaurant but vacant for years, was purchased by the village in 2013 with redevelopment in mind, village officials said.

Years ago, the village created a new zoning designation for this area — CX Core Mixed Use — to attract this kind of development, officials said.

“The project is basically what was designed for this property based on the zoning ordinance that the village enacted,” said project lawyer Bernard Citron. “We’re asking for almost no variations from anything — from height, for density — because this is the building that this zoning district asked for.”

The project team made a similar presentation to the Plan Commission in September when it held a series of group sessions and a public open house about 8000 North.

The project calls for a 12-story residential building with a courtyard and an attached five-story parking structure, according to planners. Retail space including a restaurant is targeted for the ground floor along with a small drive — referred to as a motor court — for dropping off and picking up customers.

Plans call for the garage to accommodate 265 parking spaces, 73 of which would be public parking . The project proposal also calls for four on-street parking spaces with the option of adding up to three additional spaces.

Access to the new building would not be available from north-sough Lincoln Avenue, which officials say would better accommodate traffic.

Norm Hassinger, a real estate consultant and member of the project team, said the group started looking at the site over a year ago to consider possibilities there.

“Our concept was to provide an activity generator— a place, a destination where people come to, where people work downtown,” he said.

The idea was to increase foot traffic in the downtown, which would benefit all other retail as well, Hassinger said.

Once the village purchased the property and then later a building next to it — the former home of a cocktail lounge — the structures were torn down.

Landscape architect Pamela Self estimated that 30 percent of the site plan calls for green space.

“The thoughtful site planning and the thoughtful design of the building has created a lot of exterior spaces,” she said.

According to planners, the proposed parking garage would be 63 feet, six inches in height, while the main residential building would be 136 feet, six inches tall. Village planners say these heights fall within village code and are not out of scale with surrounding buildings.

As outlined by the village and the project team, the residential section will include studio, one-, two- and three-bedroom apartments ranging from about $1,400 a month for a studio unit to about $4,000 a month for the largest three-bedroom, a top‐floor unit.

The 12th floor would include storage lockers, a fitness and yoga studio, a coffee bar, lounge, game room and party room as well as multiple landscaped outdoor areas for the use of tenants, according to the project proposal.

“The proposed development we agree would be an exciting addition to the downtown and will hopefully stimulate other developments that are of similar type,” said Skokie Community Development Director Peter Peyer

Village leaders said they considered about a half-dozen other proposals before naming this project as the best option for the long-vacant site.

“This…development proposal from the very beginning was superior to the others,” Peyer said. “That’s my opinion based on reviewing the others.”

Randy Miles, owner of the Village Inn in downtown Skokie and former president of the now defunct Independent Merchants of Downtown Skokie, said there was always talk from downtown planners about eliminating or reducing curb cuts whenever possible.

“This project not only ignores that planning strategy, but makes one of our busiest intersections much more congested with the motor court being so close to Lincoln Avenue,” he said.

But village and project planners maintained that traffic studies show the intersection can accommodate traffic generated from the development.

A letter from a resident objected to the height of the building and advocated that it be limited to six floors rather than 12.

The project team has said that construction will start in 2018 and the first residents could occupy the building at the end of 2019 if all goes according to plan. 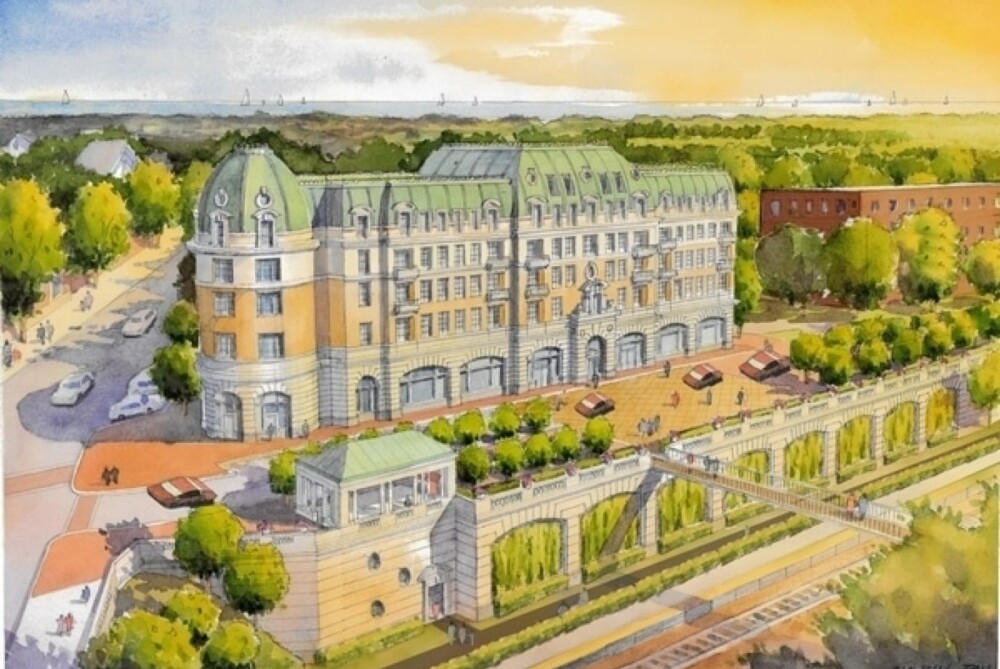